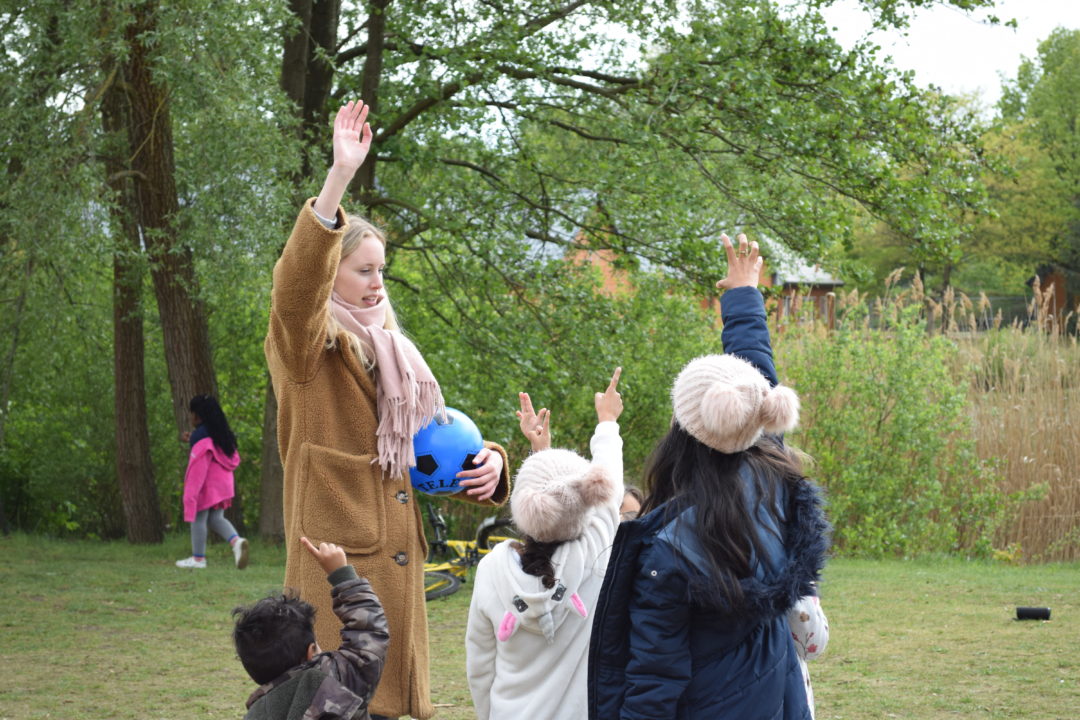 These weeks have been hectic. Not in an unpleasant way, but still, I had too little time to get everything done, to stand still, to write… And now I try to make time. If we only could – build more time – in our days, in our life? How much would you build? The bricks could be days, the windows would stand for rest, a stop in time. Would you build a big house, an open house with huge windows or a tower of mostly bricks?

Last week was my birthday, and I felt spoiled by so much attention, so many sweet words and original gifts. Hubbie surprised me with a positive vibes dinner. Daughter gave me a book : The Sun and Her Flowers by Rupi Kaur (She is an Indian-born Canadian poet, writer, illustrator, and performer, who immigrated to Canada as a child).

Let me share a poem – We are not enemies:

In my volunteer work at the refugee center, I am facing borders the whole time. This morning, when I was teaching Dutch, I felt so limited in what I could do. The three students I had from Ghana, Rwanda and Tanzania all spoke English and were learning easily. Then a student from Palestine joined us.  He only spoke Arabic, and I felt frustrated not being able to communicate. The woman from Tanzania told me she was here with her son of four years old: “You know, it can get very lonely, being here without your family.” Oh yes, I can only imagine. She said it with a smile and promised me she would study well the coming week so she would improve fast.

It is not necessary, but people praise me sometimes for my volunteer work. I also receive good advice. “Well, it will never be enough.  You need to set your limits. It is better not become too close to them.” I thought by myself: they have crossed so many borders, do we actually need to set another one? 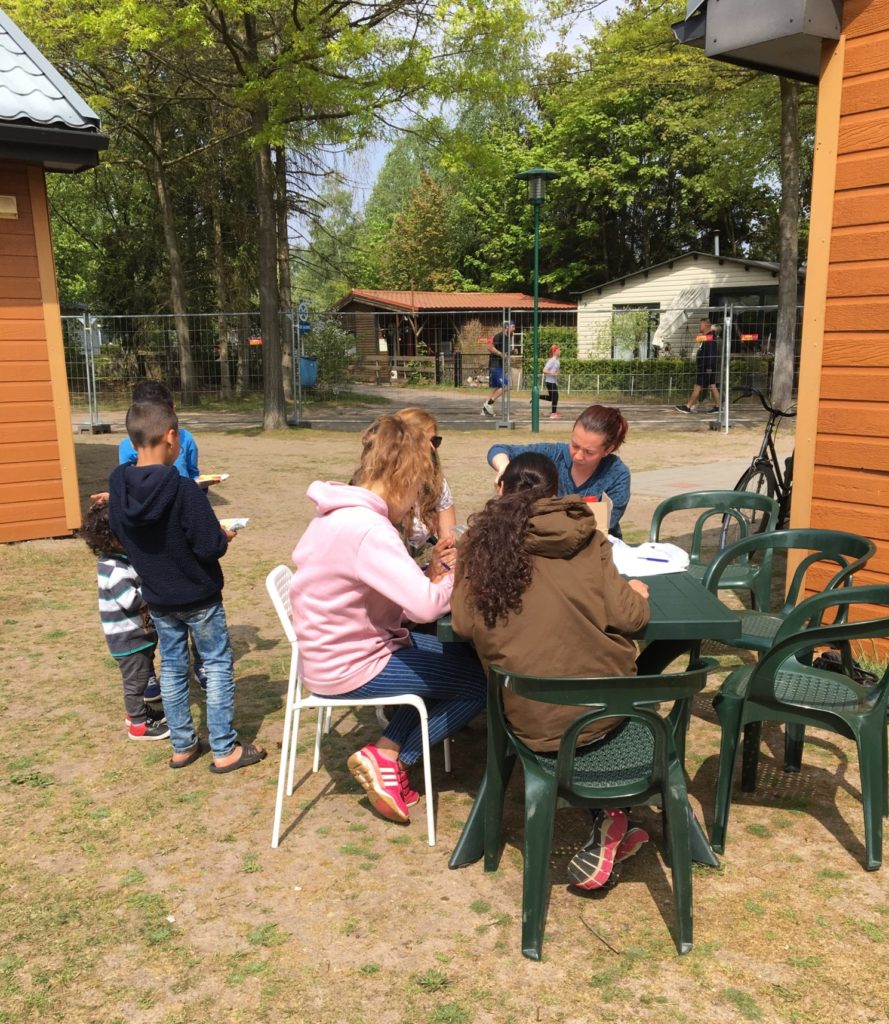 On Wednesday I went to the center for our 945-in-beeld-project. I saw two girls crossing the site with their bikes. Maryama was almost fifteen, her friend Nasim a little younger. They wanted to fill in the postcard. On the card is a list of questions: Your favorite book, your favorite artist, what is your motto in life etc… Very diverse answers have been written so far. So we sat at the plastic table outside of the little house where we teach and I helped the girls fill in the cards. Suddenly Maryama looked back at me and asked, “Can we please sit on the other side of the house?”  We were sitting close to the huge gate of the center, and on the other side of the gate is a walking path.  Usually not many people pass there, but now there was a running contest. A lot of people from our hometown were passing, looking at us and the other inhabitants of the center, behind the gate.  Maryama said: “I don’t want the kids from my school see me here.”

More kids came – I brought cake, and word spread around – they all wrote the cards and told me where they came from, how many languages they spoke, where their parents came from, what they wanted to achieve here. Some families are split up, just one parent coming with one child, or a kid coming with an adult sibling.

Today I joined Daughter and Oldest’s girlfriend at the center. Time for children’s entertainment. They were all very ready for some distraction. Yasmina brought her baby brother, Yussuf who just turned one today. He was brave, sitting in his stroller, looking at the kids running and dancing, moving his little legs to the rhythm of the music. 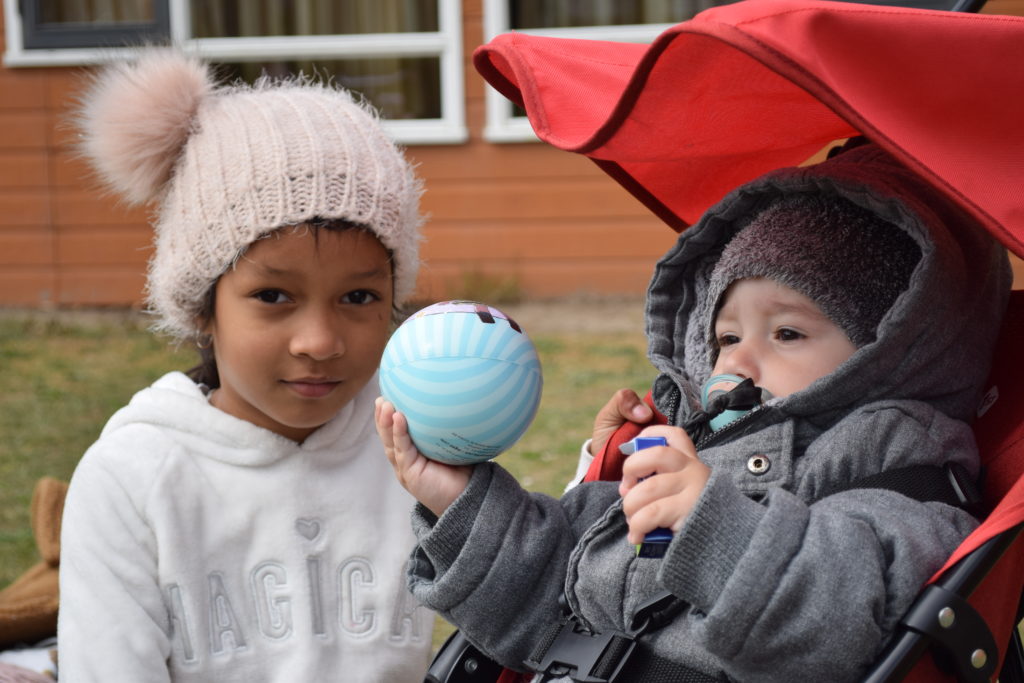 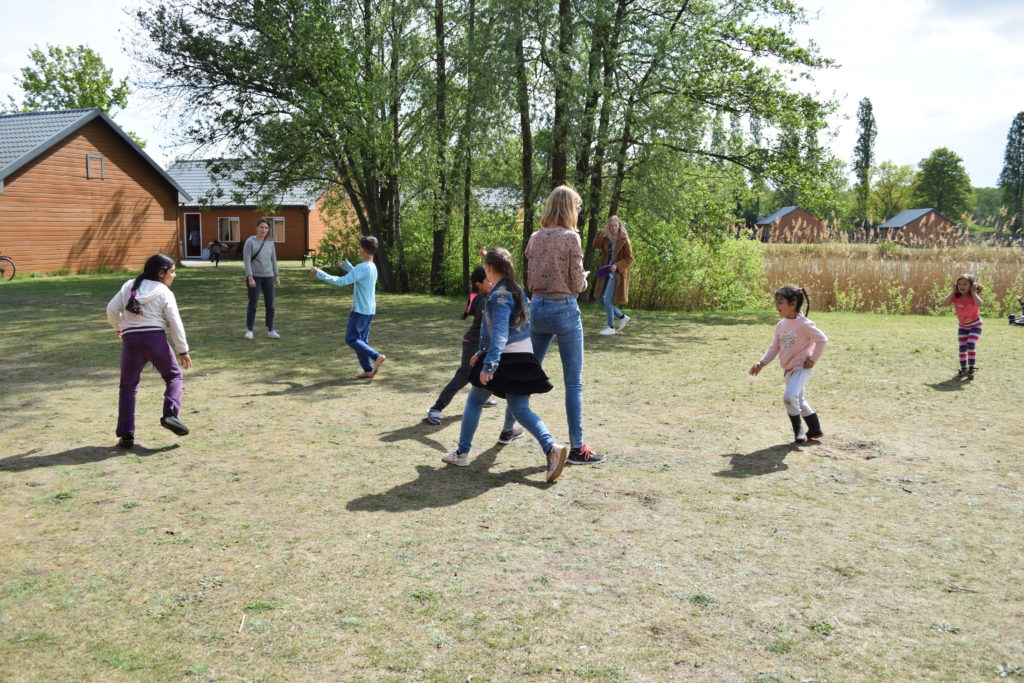 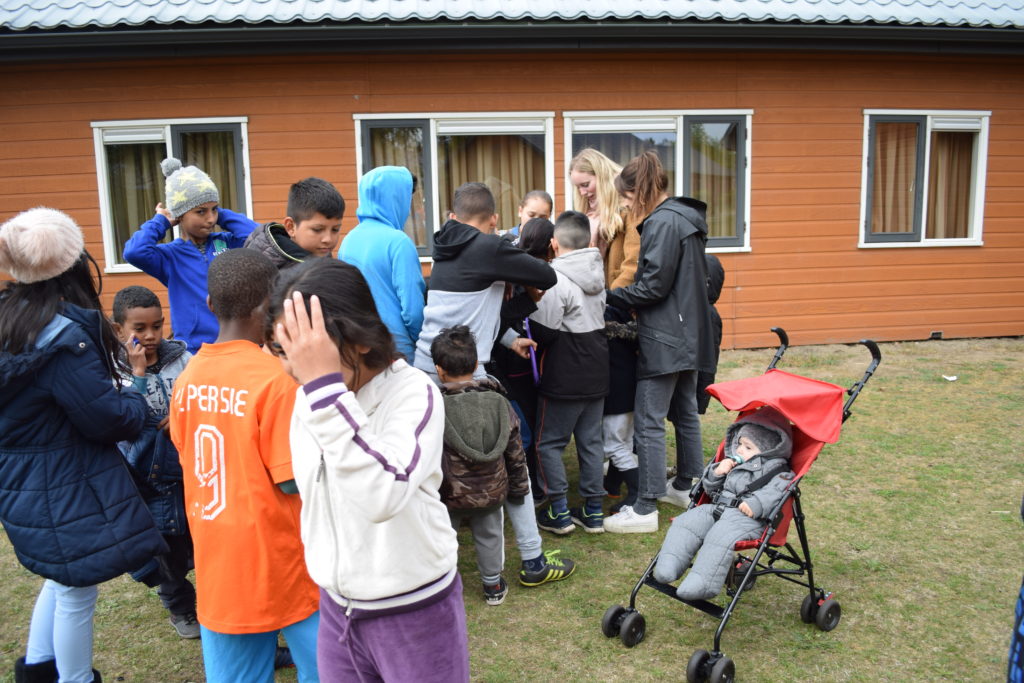 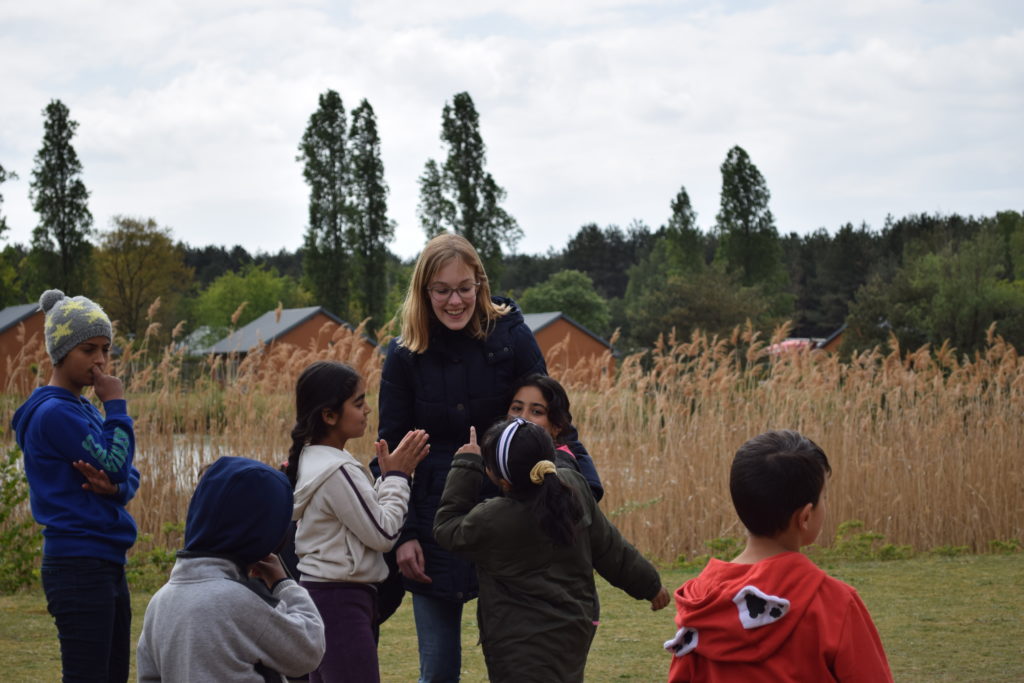 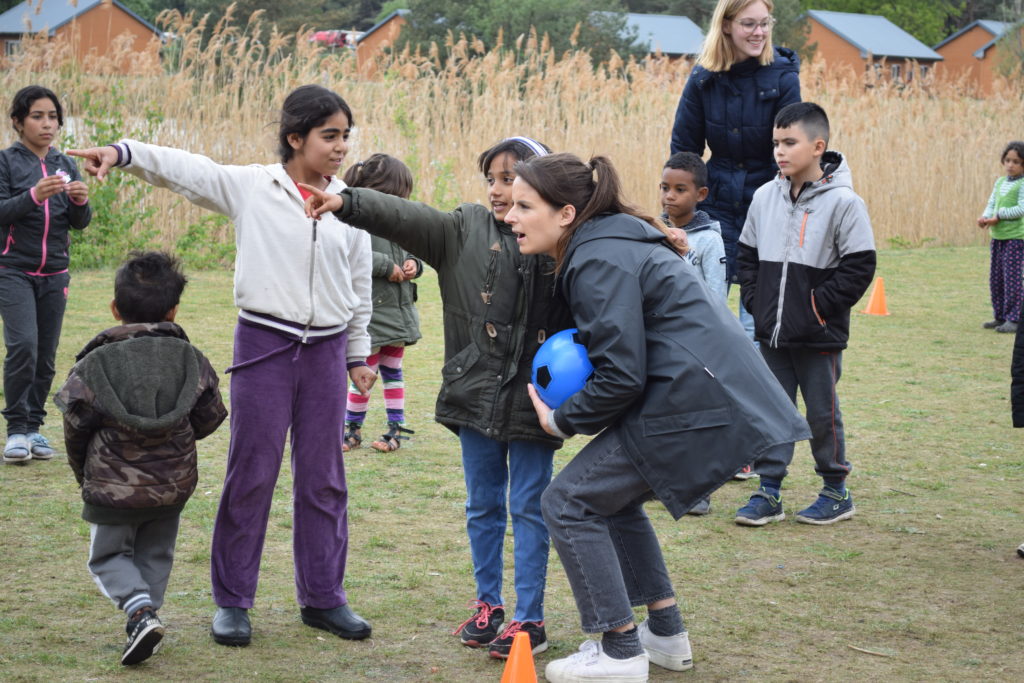 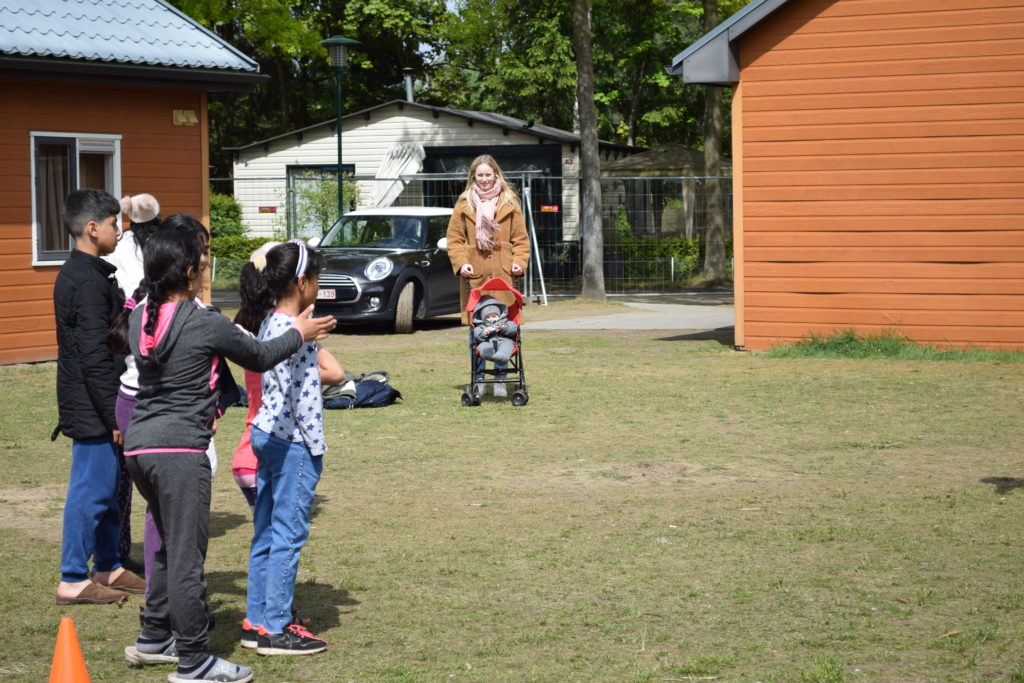 While standing aside, two young Palestinians came to me to talk.  One was a fisherman in Gaza.  He first showed me a picture of the big fish he caught (the biggest weighed 70 kilos) then a picture of his boat that was damaged because of the war. The other one came from Lebanon.  He was a Palestinian but had lived in camps in Lebanon since he was born. They asked me whether I had heard what happened this weekend in their homeland.

In the meantime Daughter’s boyfriend and friends took a bunch of people with them, for a walk in the woods. People talked about the wars in their home countries, showed him pictures of damaged towns and about life in the center. A few teenagers were bored in the center; there are activities for small children and for adults, but not for teenagers. So here’s another mission 😉 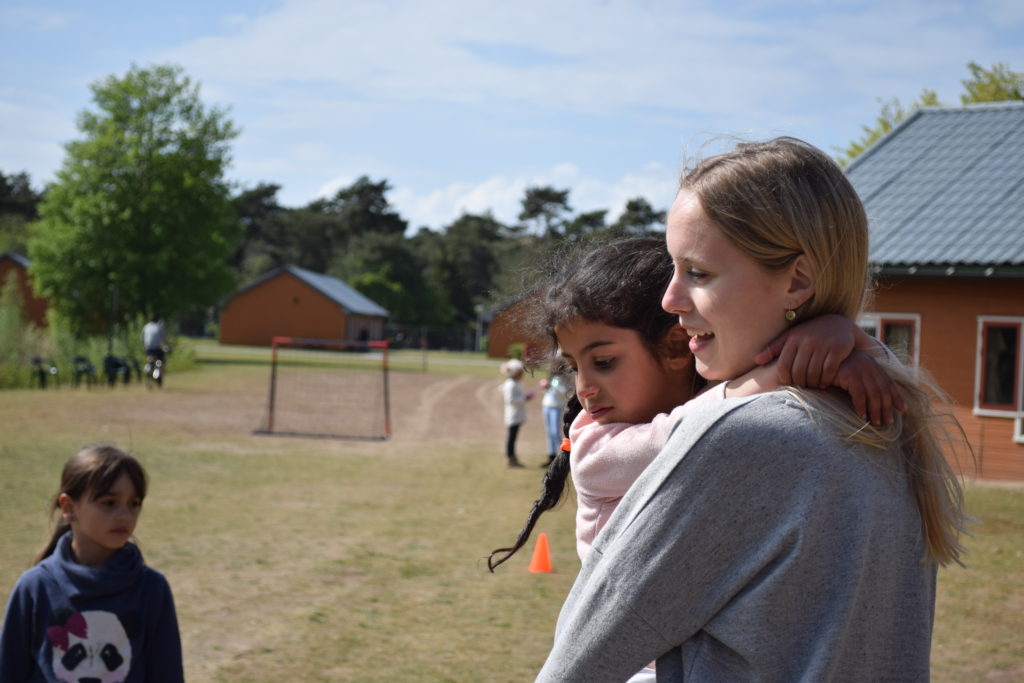 Let me end with another poem – Immigrant