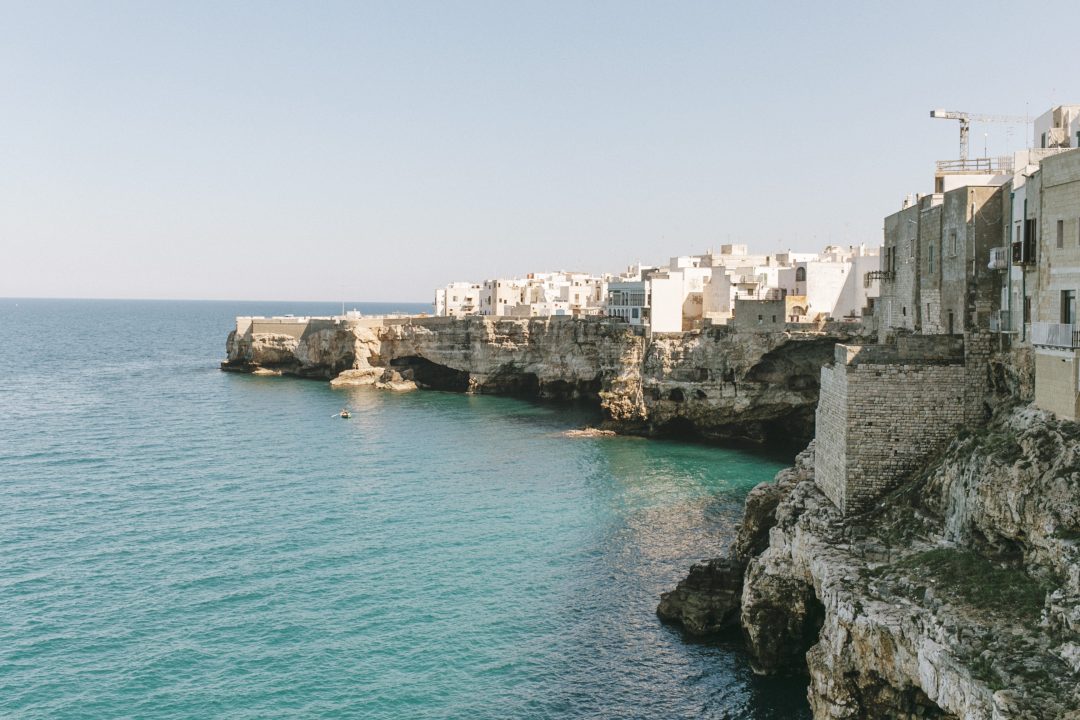 Under the Puglian Sun.  This is the name of the whats-app-group for my American friends and me. We created this to make it easy to communicate before, during and after our stay in Casa Vita. Before it didn’t really work because I was the only one who had installed whats-app, during wasn’t much use either, because in the house we were without internet most of the time (remember the broken wifi-antenna in the area?) and outside were the high roaming costs.  But now we’re all back home and chatting about how lovely our vacation was. And how hard we are struggling to get back to reality… 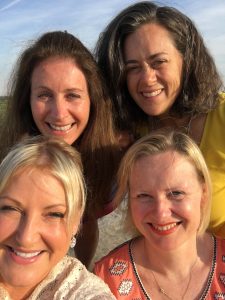 It’s seems a little odd to use the word “friends” for people I only see once every few years or so.   We live on another continent, speak a different language and there are many cultural differences.  The last time I saw Jenny and Debbie was almost three years ago, and then merely for one evening.  But nonetheless we are good friends.  We have had some wonderful vacations together over the years, and I believe this is the best time to catch up, when you have time for endless conversations.  We have time to discover that there are so many items that unite us: remembering those days when we met at Washington school, waiting for our sons, who were friends back then, full of endless energy and mischief.  Being proud of the grown-up men they have become – something we were a little afraid of at some point, I honestly admit 😉 Discussing relationships, the ones that lasted and the ones that didn’t make it, and putting all possible reasons under the psychological microscope. Analyzing our own characters, why some try to avoid confrontation and others are straightforward. We agreed upon the fact that the main reason lies in our different childhoods. Well, we aren’t the first to come up with this theory, right? None of us has a psychology degree, but we can all be therapists. Do you remember the quote: Friends are the best therapists? Wine is too… and we tasted plenty of excellent local wines during our week.  In fact it’s possible we tried almost all of the wines in Puglia…

Laughter is a big part of friendship too, just continuing the silly jokes we laughed about so many years ago. Hilarious!

END_OF_DOCUMENT_TOKEN_TO_BE_REPLACED 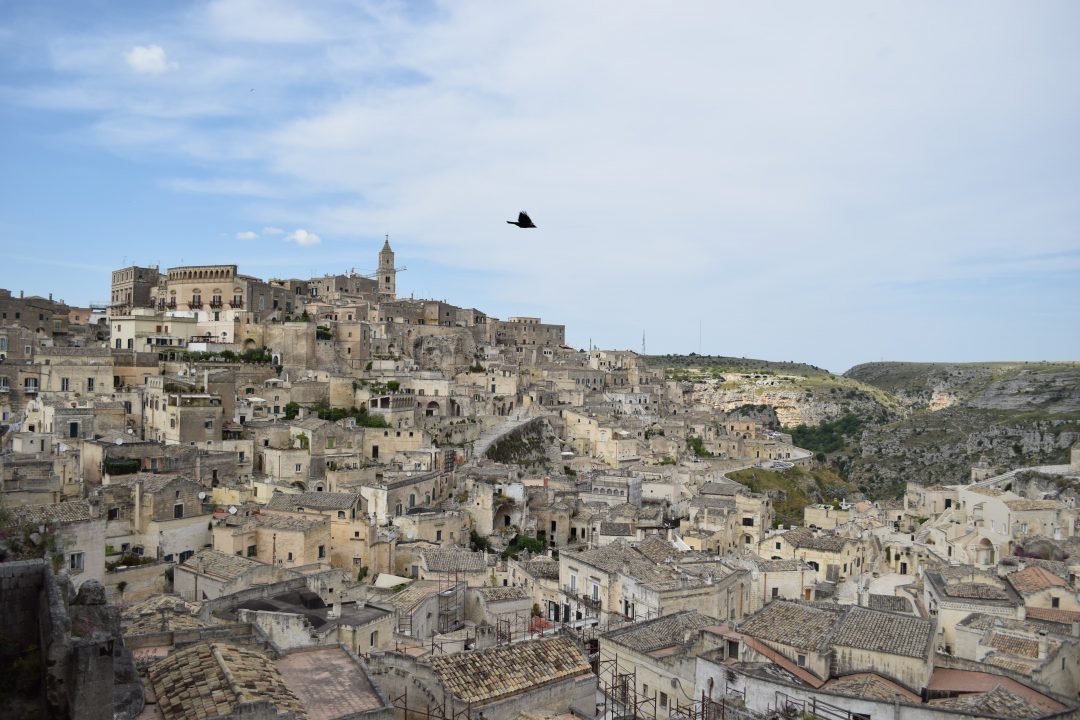 An old city with old friends

I woke up a little later today. Still in my pajamas, I went outside to see how the cactus was doing. There were a few flowers yesterday, and it looked as though a few new ones were about to bloom.  I noticed two beautiful yellow ones. While moving closer to take the perfect picture, I impaled my knee on a lower leaf.  Ouch! That hurt! I pulled the needles out, one by one, but some broke off under the skin, so I still feel them.  I guess all artists must suffer for their art.

We returned late yesterday, after a fabulous dinner at Bros’ in Lecce. One of my friends had seen a recommendation in Forbes Magazine (“The 10 Coolest Places to Eat in 2017”), and I can tell you, it was worth it.  We had a five course tasting menu, which seemed to be about ten courses and somehow included four desserts.  It’s a favorite restaurant of Thomas Siffer’s (a well known  journalist from home), so a lot of Belgians have already discovered this unique and tasty dining experience.  If you go there, don’t be put off by the terrible exterior.  It is so unappealing, we almost didn’t go in.

My three friends love it here.  They have never been to the South of Italy, and every day has been a new and wonderful treat for them. On Tuesday we visited the Sassi of Matera, a place that was new for me too.  It is about an hour and a half drive from here, but a beautiful drive! First you pass through the Valle d’Itria, with all the Trulli and and stone walls and fields of poppies and olive trees.  And then you come into Basilicata, the county west of Puglia, which you see first from above in expansive views of wide open farmland, a completely different look and feel. 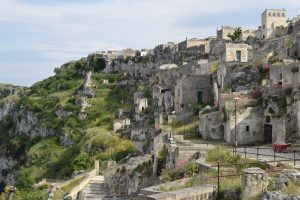 Matera is said to be one of the world’s oldest towns. The simple natural grottoes that dotted the gorge were adapted to become homes. The prosperous town was the capital of Basilicata in 1663 till the early 1900s, when the unsustainable increase of population led to the habitation of unsuitable caves, originally intended as animal stalls – all lacking running water.  By the fifties over half of Matera’s population lived in the caves – the sassi – sheltering an average of six children. The infant mortality rate was 50%. When this became more publicized, it was the shame of Italy! The Italian government forced the inhabitants to relocate to new government built houses, so the sassi were abandoned.  Our guide, Brunella, told us her parents had lived in the caves as children.  She told us that in the worst times, when they were near starvation, parents would feed their children poppies, to keep them asleep for days, both to shut down their bodies’ needs and to give them time to find food. 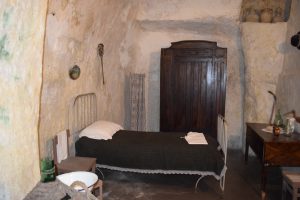 In 1993 the sassi were declared a Unesco World Heritage Site, and many of the caves have been restored and remodeled with electricity and plumbing and ironically are now homes to Matera’s wealthiest residents. But the beauty and feel of the original caves has been preserved, and that, combined with the town’s history of outrageous misery, has transformed it into Basilicata’s leading tourist attraction.

Since it looks like old Jerusalem, it is the scenery of many movies. One of them is Mel Gibson’s controversial film ‘The Passion of Christ‘ which shows how Matera has barely changed throughout the centuries.

What’s on our list today? Polignano a Mare and Monopoli, two beautiful cities half an hour up North. 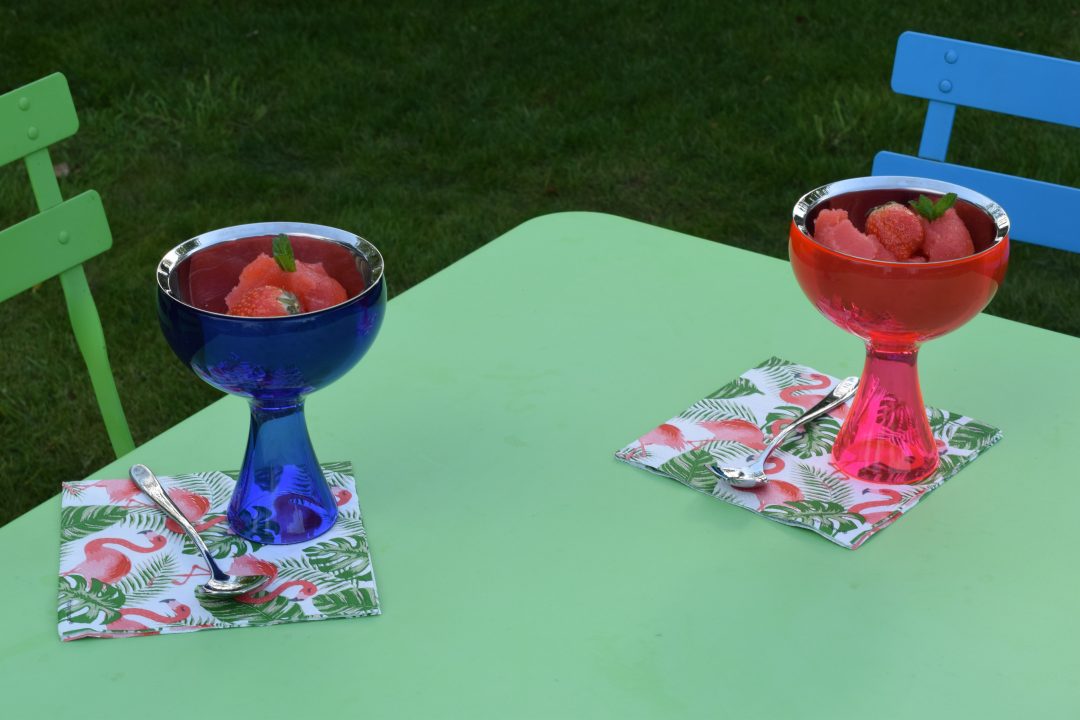 Hopefully you have enjoyed a few days of warm weather in your country? In the statistics in my blog I see readers all over the world and I honestly envy the ones living under the sun the whole year round.

For my birthday Hubbie surprised me with a very practical present (one he can enjoy himself, but not by using it himself): a Thermomix. It is a high potential kitchen robot. His defense is simple: it saves you time! While unpacking this heavy appliance I wasn’t happy at all:

I am lucky to have many friends, but at that point I felt especially lucky to have a friend with a Thermomix.  My friend Annick jumped in her car after my SOS-message, and patiently explained all the features of this machine. We made a red fruit sorbet together and it tasted delicious, yummy!

Last weekend I made béarnaise, different smooth (it chops so strongly!) soups and guacamole with my new toy. All easy and with tasty result!

So with the sun bursting through the clouds for a minute, I prepared (without looking in the Thermomix cook book) a refreshing, crunchy and sweet sorbet of Belgian strawberries. When eating them in my holy flashy goblet from Alessi, I feel like a goddess (no, I still haven’t received the Call). 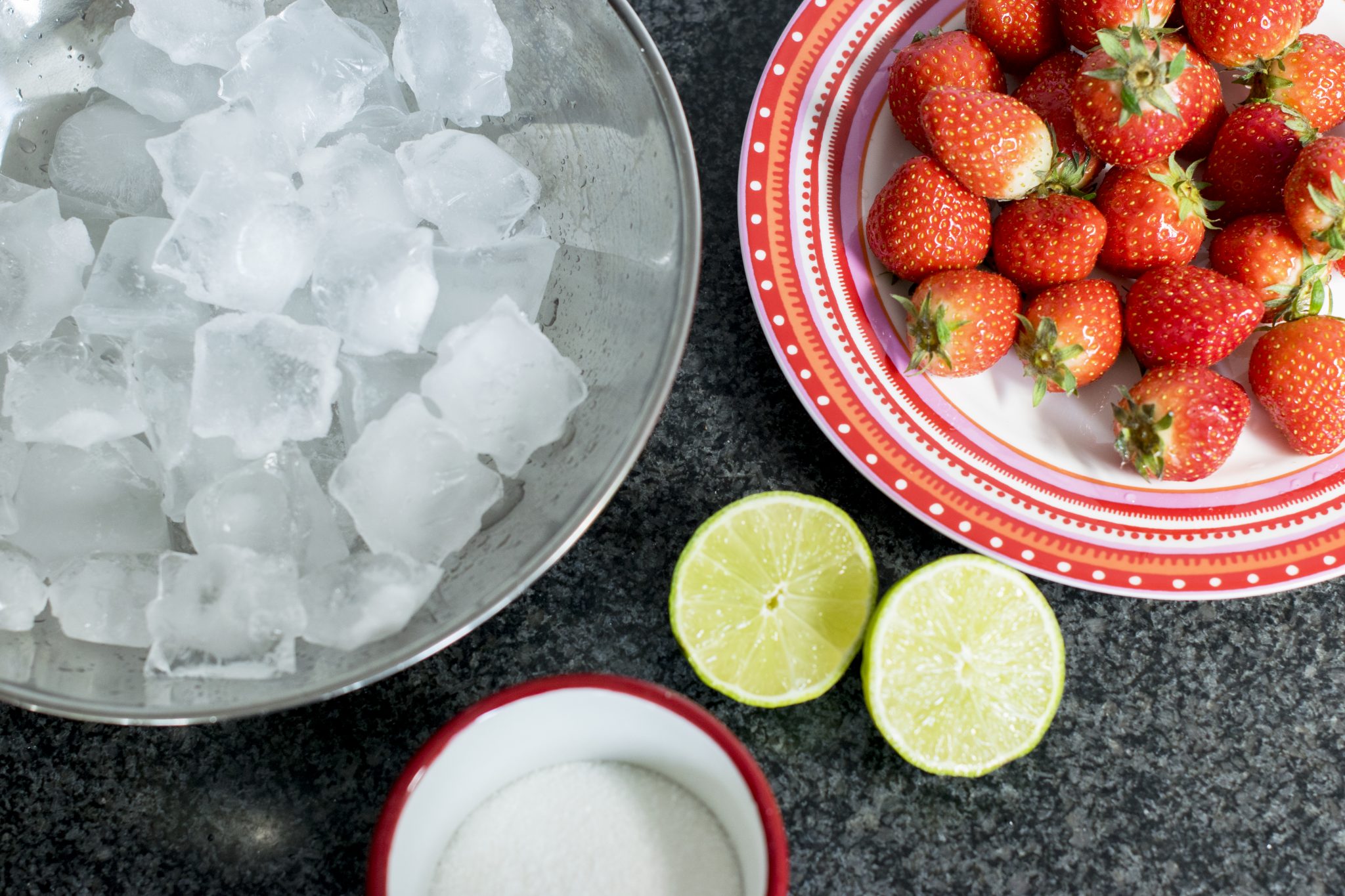 What do you think the conclusion is?

O Sophia is very happy with her birthday gift, although she hates to receive presents for working purposes
O Sophia wasn’t happy at first, but she has learned fast and is overwhelmed by all the creativity she can put into her new kitchen help. Yet she is too stubborn to admit she cannot miss her aid in the kitchen anymore (she even talks to him).
O Sophia has put the Thermomix on Ebay and will buy a party dress with the return
O Sophia has never been happier in the kitchen, but hasn’t felt more frustrated when she is standing on the scale now

If you guess right, I will make you a whole meal with the help of my new toy. Write back and let me know!

* if you don’t read the safety instructions you might end up with a blue eye from an ice-cube being catapulted out of the strong motor.

It has been cold. It has been raining all day. It’s getting dark already, although it is 8 pm.

The only thing that can save me is food. Food that has soaked in the sun’s rays. Food that tastes like summer! 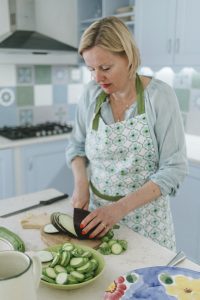 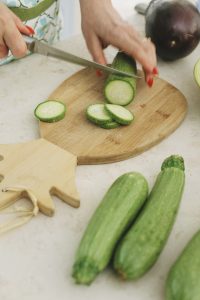 Luckily I can watch the happy and sunny pictures Marie made when she visited Casa Vita a month ago. In Italy everything tastes so much better. The mozzarella is so creamy and delicious. I usually choose smaller tomatoes, they have more flavor. And then I grill some vegetables: eggplant and zucchinis, smothered in olive oil from the region.

I would like to look more like Nigella Lawson, still working on it, it is my first appearance, right? 😉

What is so wonderful in our house is that there is so much to be found in the yard. On the front there is a big hedge of rosemary. The only thing I need to do is to take my scissors and cut some. 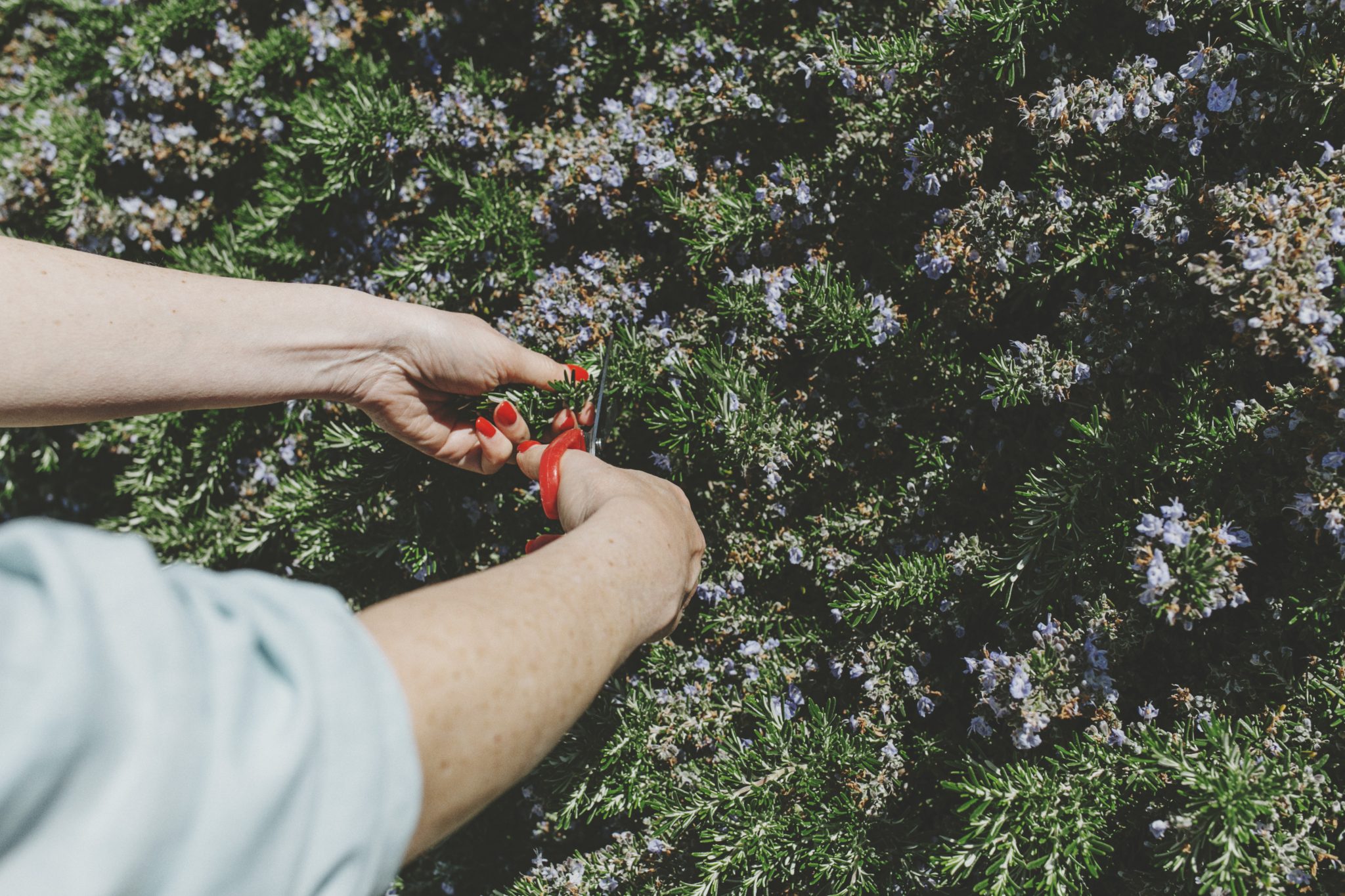 Grilled veggies with just the local mozzarella is enough for me. But if you need more, you can always also find a wide range of prosciutto or salami to go with it. Ideal for a light and delicious lunch.

I am very much looking forward to my next visit. This time four friends are coming with me. Or better said, we will meet each other there, because they are flying over from the US. I got to know them when we were living in the States for three years, and we met through our kids–Oldest was friends with their boys. We stayed in touch, through email, Facebook, and visits.  I went back to the States a few times – I never get tired of visiting New York!–and a few years ago we went to a Spa together. We laughed so much! It is always fun seeing each other again and catching up.  They came over to Europe a few times too.  We took the boys to Normandy to see the WWII historical sites and stayed in a small, deserted castle. While it was fun to have this huge estate to ourselves, playing cards in huge dining room, the strange noises in the attic fired our imaginations.  Our to trip Paris with our daughters was also a bit creepy. The small hotel we stayed in was the opposite from the castle in Normandy, small and dark but in the perfect location, across from the Notre Dame.  It was called Esmeralda, and old Esmeralda was still spooking around.

I am sure we will have fun again. And do lots of cooking in our new kitchen.

What is your favorite recipe?

All pictures in this post are made by Marie Bouly Photography