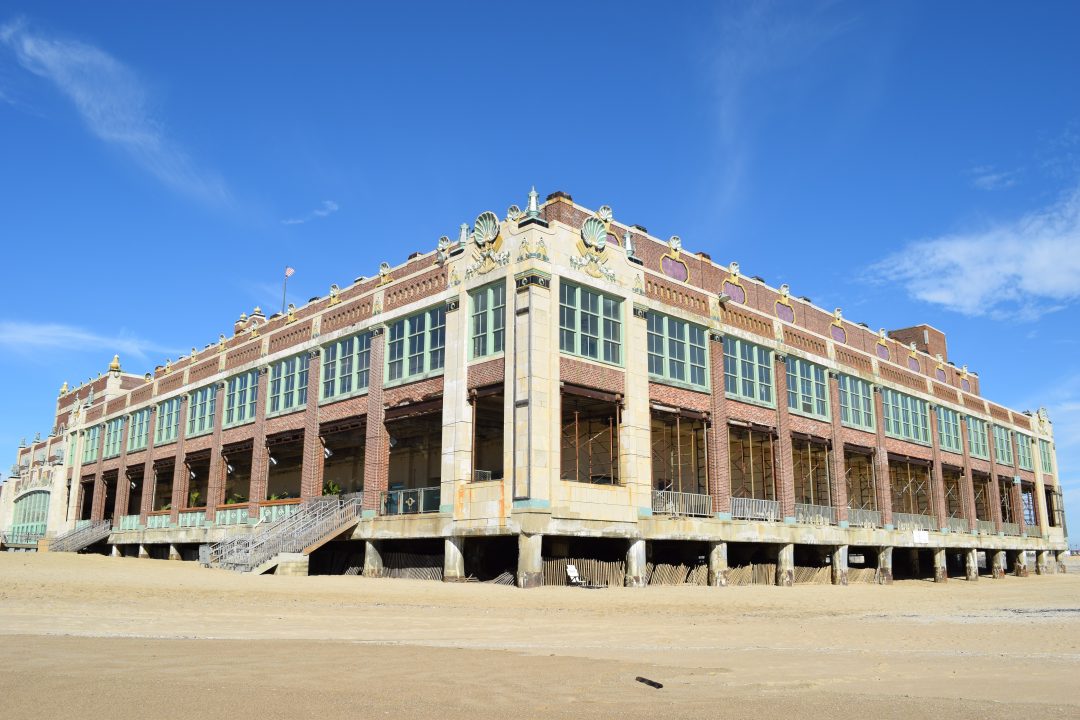 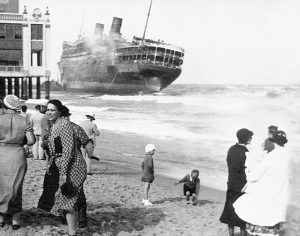 It is also known for a major disaster: a big cruiseship caught fire just in front of the coast of Asbury in September 1934. SS Morro Castle was an ocean liner of the 1930s that was built for voyages between New York City and Havana, Cuba. The ship was named for the Morro Castle fortress that guards the entrance to Havana Bay. On the morning of September 8, 1934, en route from Havana to New York, the ship caught fire and burned, killing 137 passengers and crew members. The ship eventually beached herself near Asbury Park, New Jersey, and remained there for several months until she was towed off and scrapped.

We arrived in Asbury on Monday night when it was already dark: cocktail time in Jen’s cozy and perfectly furnished apartment and then off to diner. Warm temperatures still! We passed some typical bars where you can just sit, have a drink and enjoy live music. Bands perform there. And guess who got discovered here in Asbury? Yes, the Boss, Bruce himself.

We ended up in a great pizza place, cherishing our last night together and savoring delicious pizzas. 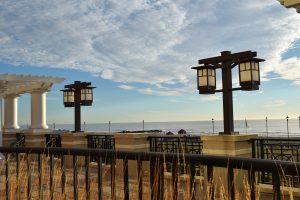 The next morning: a clear blue sky and clear blue sea. Breakfast with view of the beach and the ocean. Debbie had to leave after breakfast, unfortunately she had to work 😉

I borrowed a skirt from Jenny because I really didn’t bring summer clothes. And it felt like summer, except for the crowds of tourists who were -luckily- missing in this gorgeous scenery. We walked on the beach, and Jenny told me she once spotted a school of dolphins close to the beach. While watching the surfers, our feet in the water, we saw movement far into the ocean. Yes! Dolphins, and so many… what fortunate timing! I had my camera with me, but, not my telelens – which I had brought to the US but hadn’t used so far, arrggh… Well, looking through your own eyes instead of a camera or phone is wonderful too (sometimes we tend to forget this). Seeing these creatures jumping in and out of the water gives you a such happy feeling.

I couldn’t help taking photos anyway! Let me know if you can spot a dophin;-)

Asbury’s old buildings from around 1900 are great photo ops, too. They are renovating the buildings now, and I hope they will keep their original frames and grandeur. 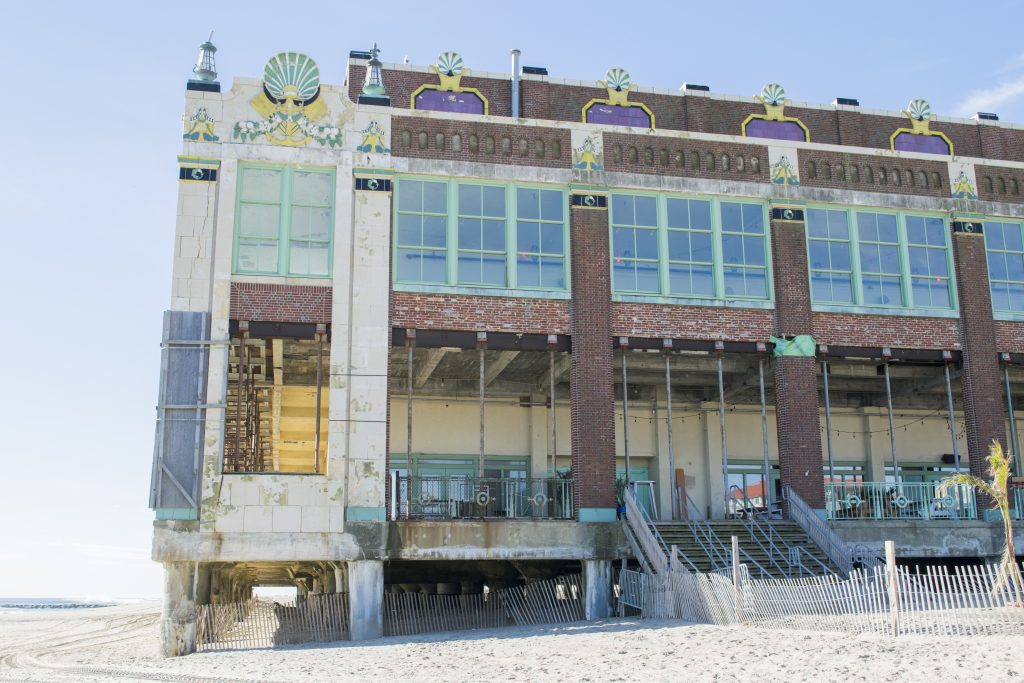 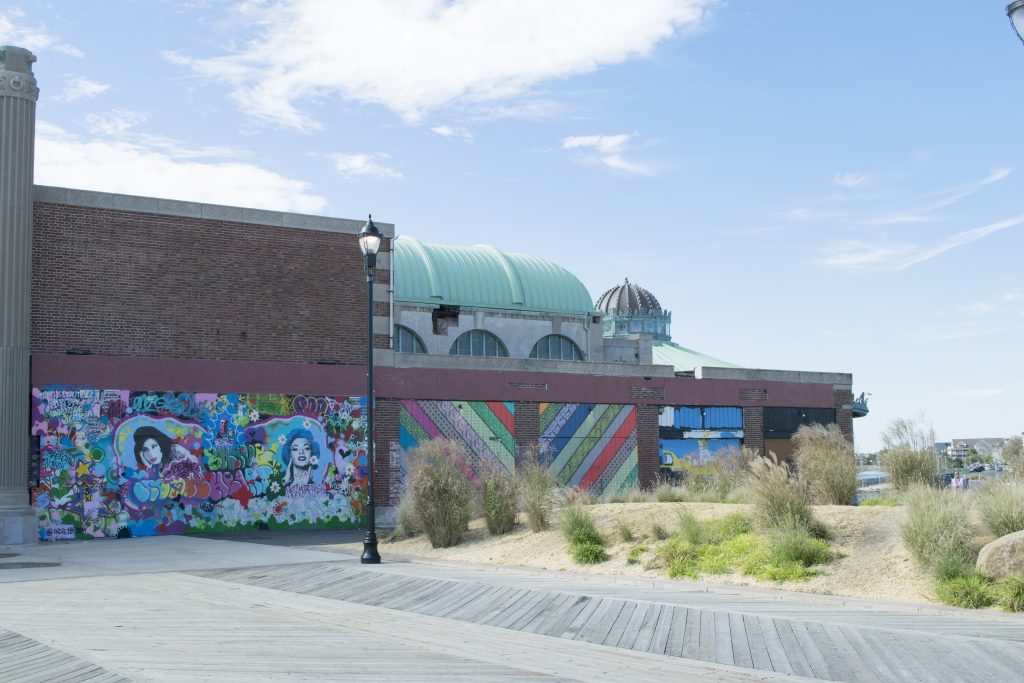 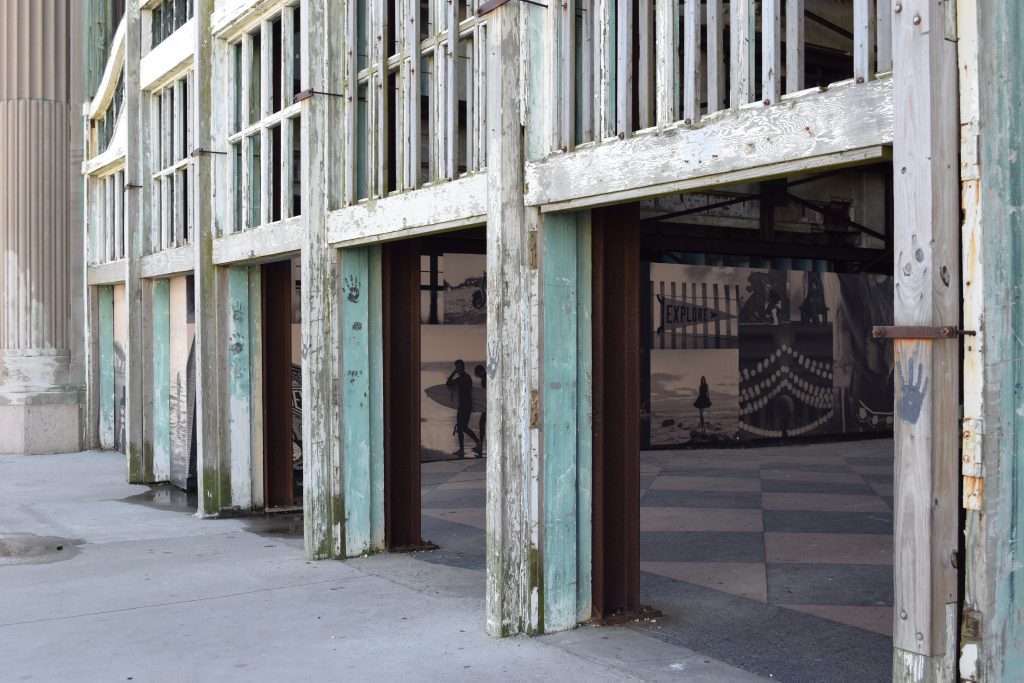 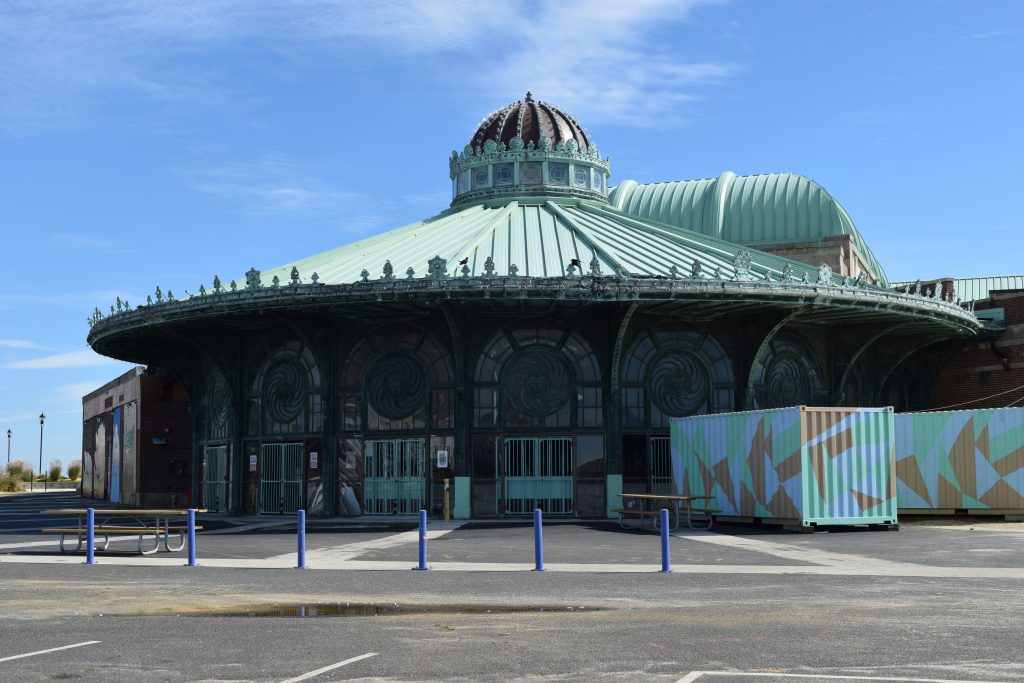 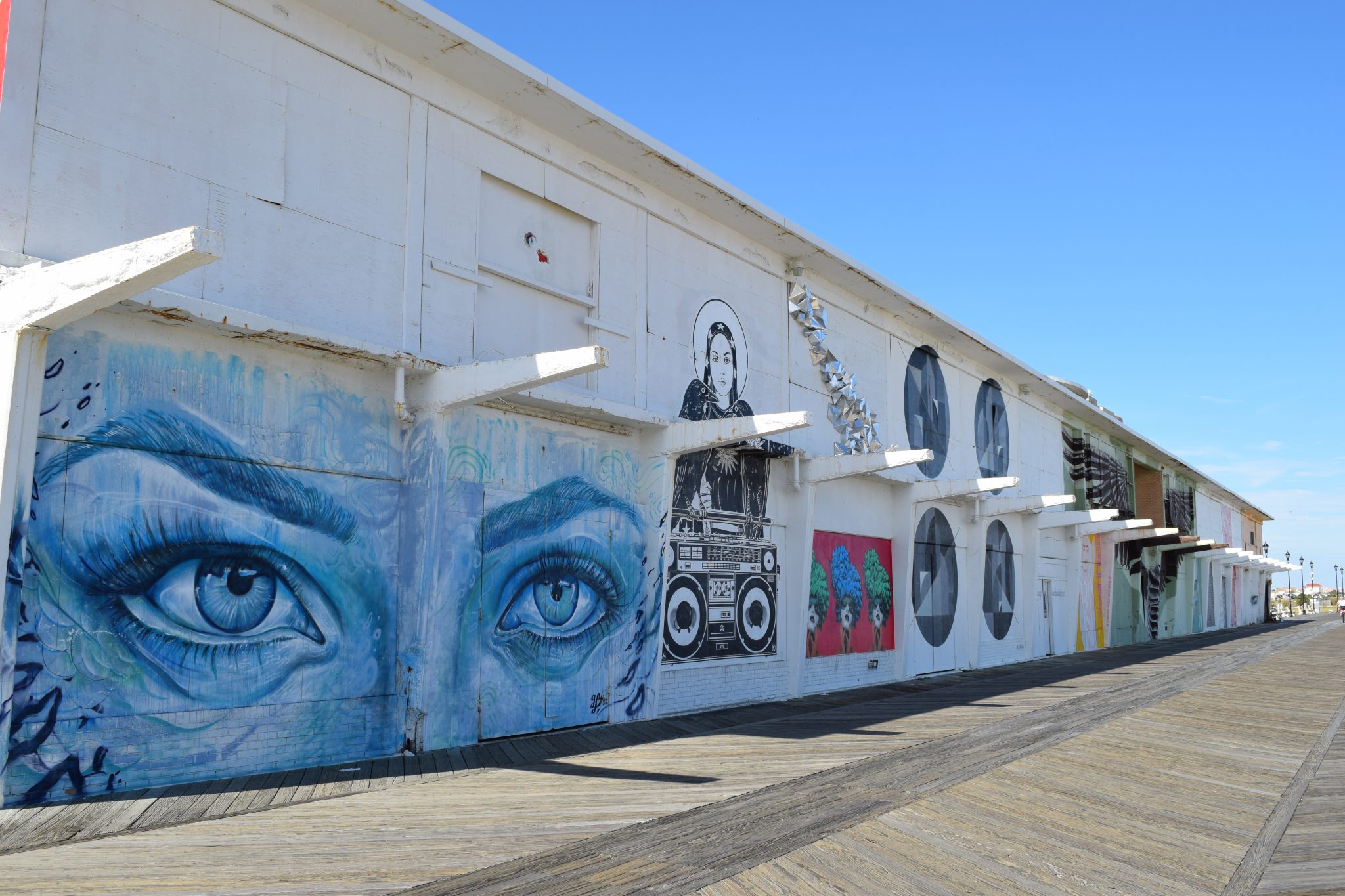 Do you believe in signs? I do, I think. Sometimes I have the feeling things you see or go through, have a meaning. So after the dolphins we suddenly saw hundreds of butterflies. What it meant, I don’t know, but it was again beautiful to watch. 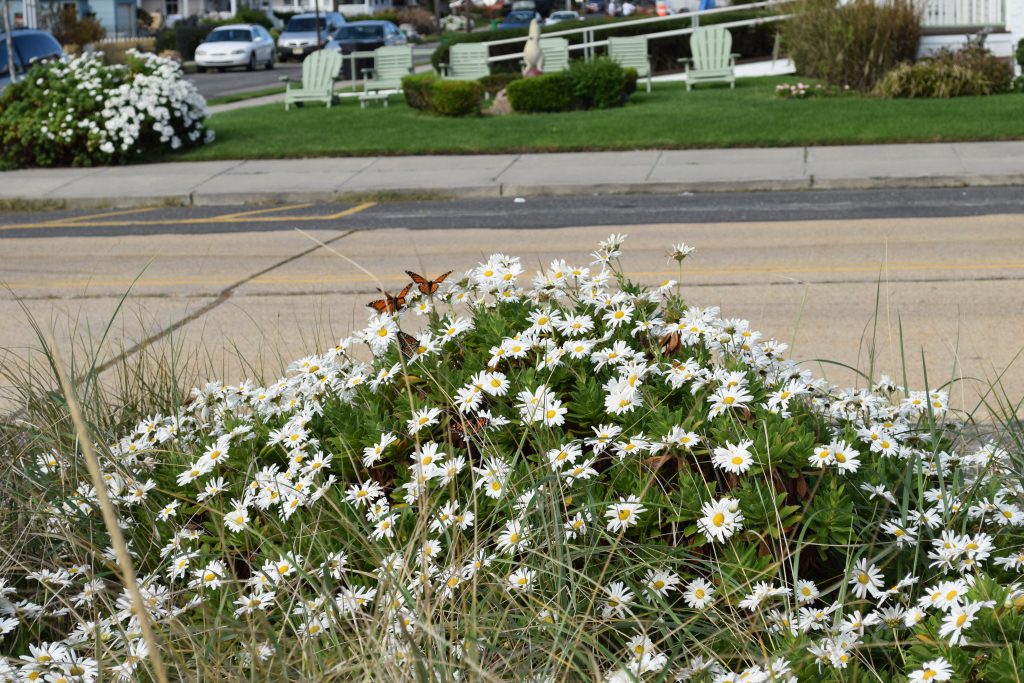 We walked further on the boardwalk towards the next town: Ocean Grove. Totally different. Charming too, but in another way. Neat and cosy colored houses, with their flowers, flags and rocking chairs on their brushed down porches. And in the houses, invisible but alive, the strict Methodist religion. Do you want an example? No alcohol allowed in this town! Only prayers. We strolled through the straight lanes and then quickly rushed back to Asbury for a pasta Vongole and two white Chardonnays. 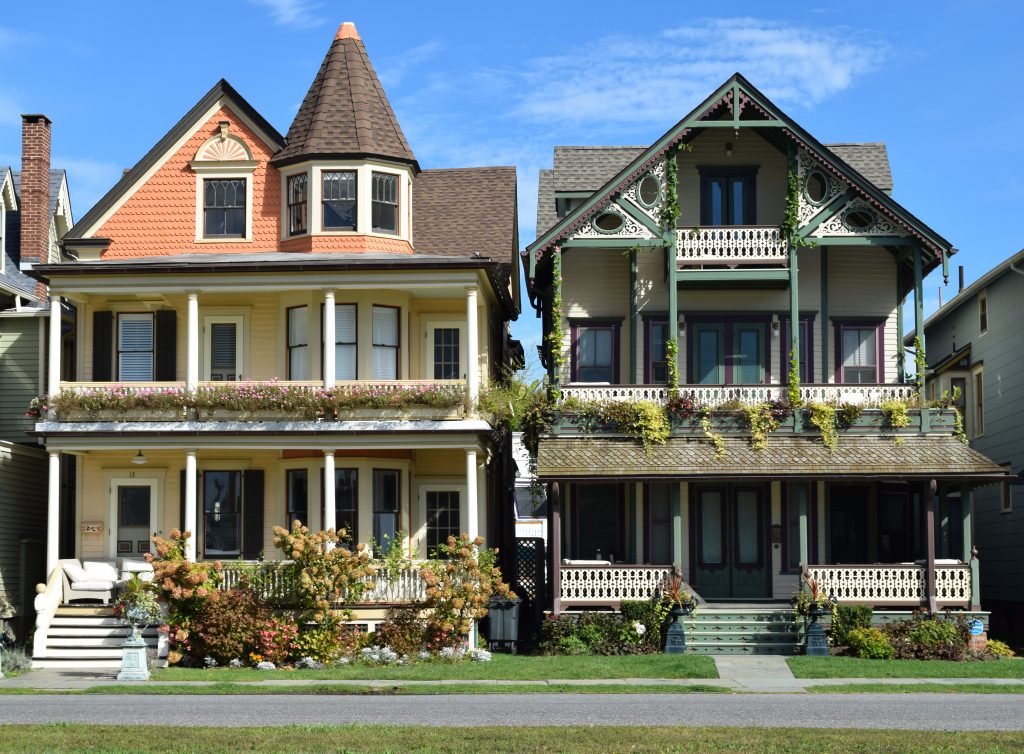 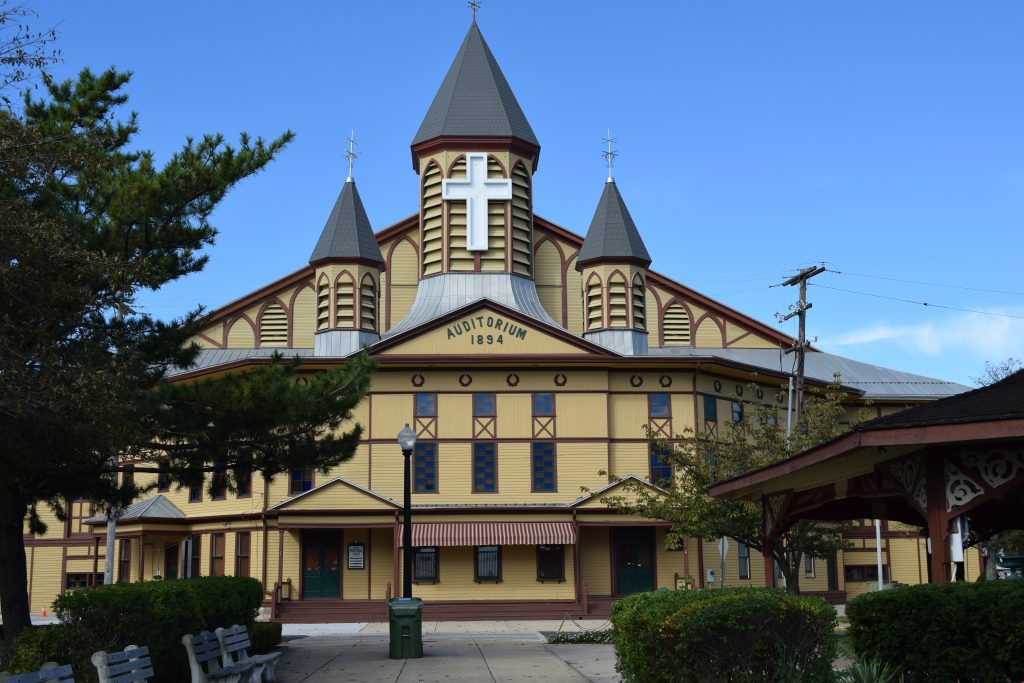 I needed to leave for the airport at three. It was a short day but yet again such a gorgeous one. And the end of a delightful week in the States.

Thank you Phyllis, Nancy, Denise, Debbie and Jen! And their hubbies/boyfriends who helped me feel welcome too. (Did I tell you the plan was to put a score on each of the partners? No favorite ones – I wouldn’t dare – they all got a nine!).

Next week, no more glory story on my visit in the States. But I will write on a book a friend wrote. I had such a good talk with her yesterday.

most forgot about the dolphins, here is the solution 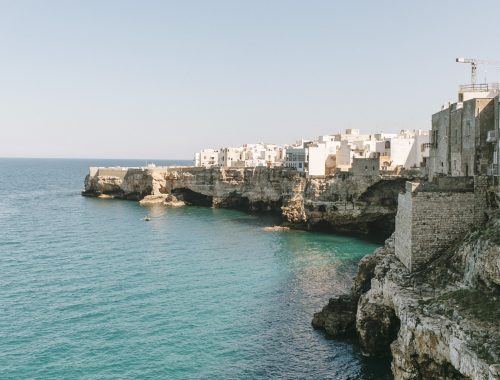 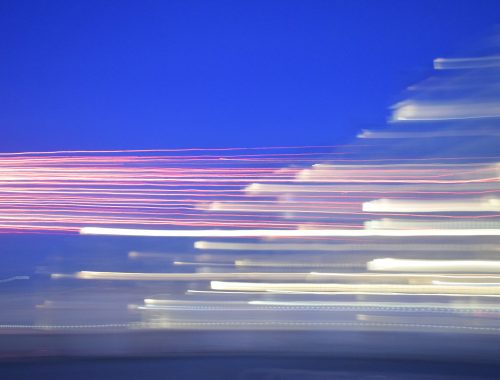