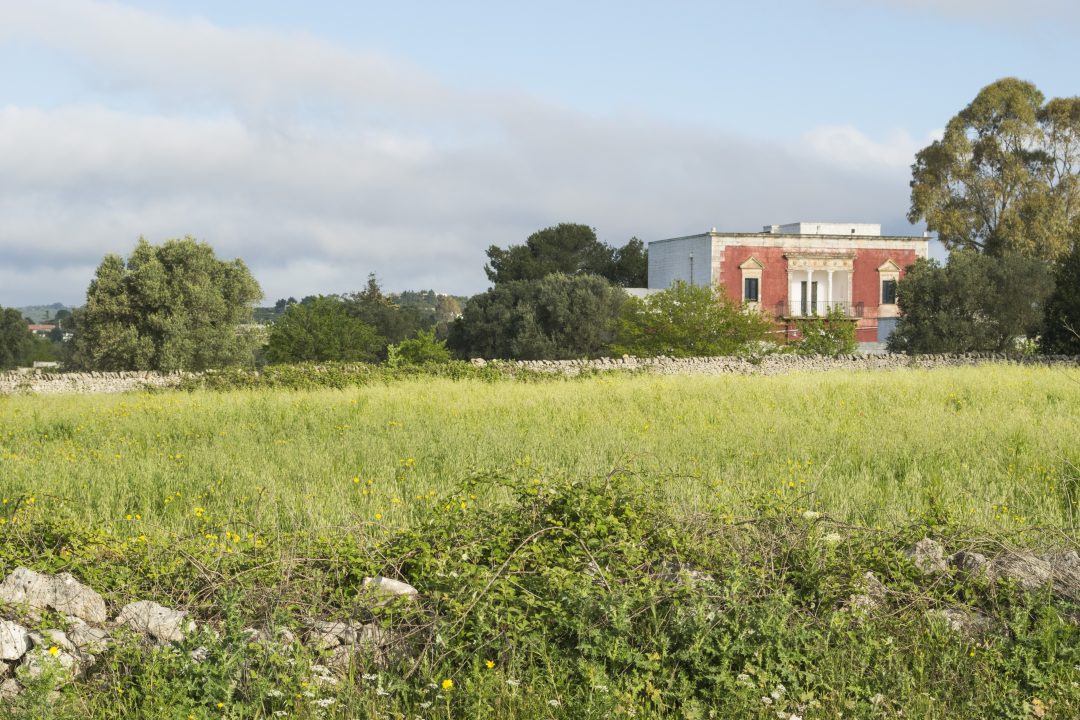 Puglia: heaven, with some sharp edges

Have you ever visited Puglia? You definitely must!

I just got back last night after a busy Ryanair flight. I ordered a white wine to be a bit soporific and less sensitive to the disruptions of the noisy kid sitting beside me. On the other side was his father, who spent most of the time trying to calm his son down. When the father wasn’t looking, the boy sneakily pushed his feet onto my thigh. At first I tried not to react and stared intently into my book.  But then Paolo – the boys’ name I learned later – took one of his many stuffed animals and tapped with the nose of a groundhog on my arm and whispered: “Hello, I am Tippy!” I melted and laughed. We became friends. He showed me his achievements in the games on his iPad, and I gave him my napkin when his hands were full of melted chocolate. Eventually he calmed down. I fell asleep and woke up during landing, my head bouncing against the window. “Another Ryanair flight arriving on time!” reverberating through the speakers. Paolo applauded enthusiastically together with the rest of us who couldn’t bear the overcrowded, close quarters of the plane.

It was an animated week. I got some stuff done I had planned, painting furniture in the Sofia Loren room: the rack, bedside tables and metal beds. They are all white now! 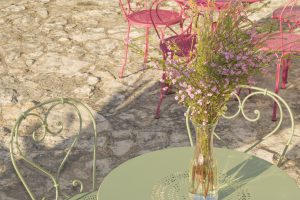 The new Fermob outdoor furniture set looks lovely on the front patio! I chose olive green. We thoroughly enjoyed our breakfast and lunch out there. Hubbie hung the swing chair on one of the big olive trees in front of the house.  I love the 1900 collection.
In the evenings I made dinner in my new kitchen, so cosy! Or we went out for dinner. One night we had a tasteful seafood risotto in a restaurant by the sea, in a small touristic spot, near the town of Carovigno. 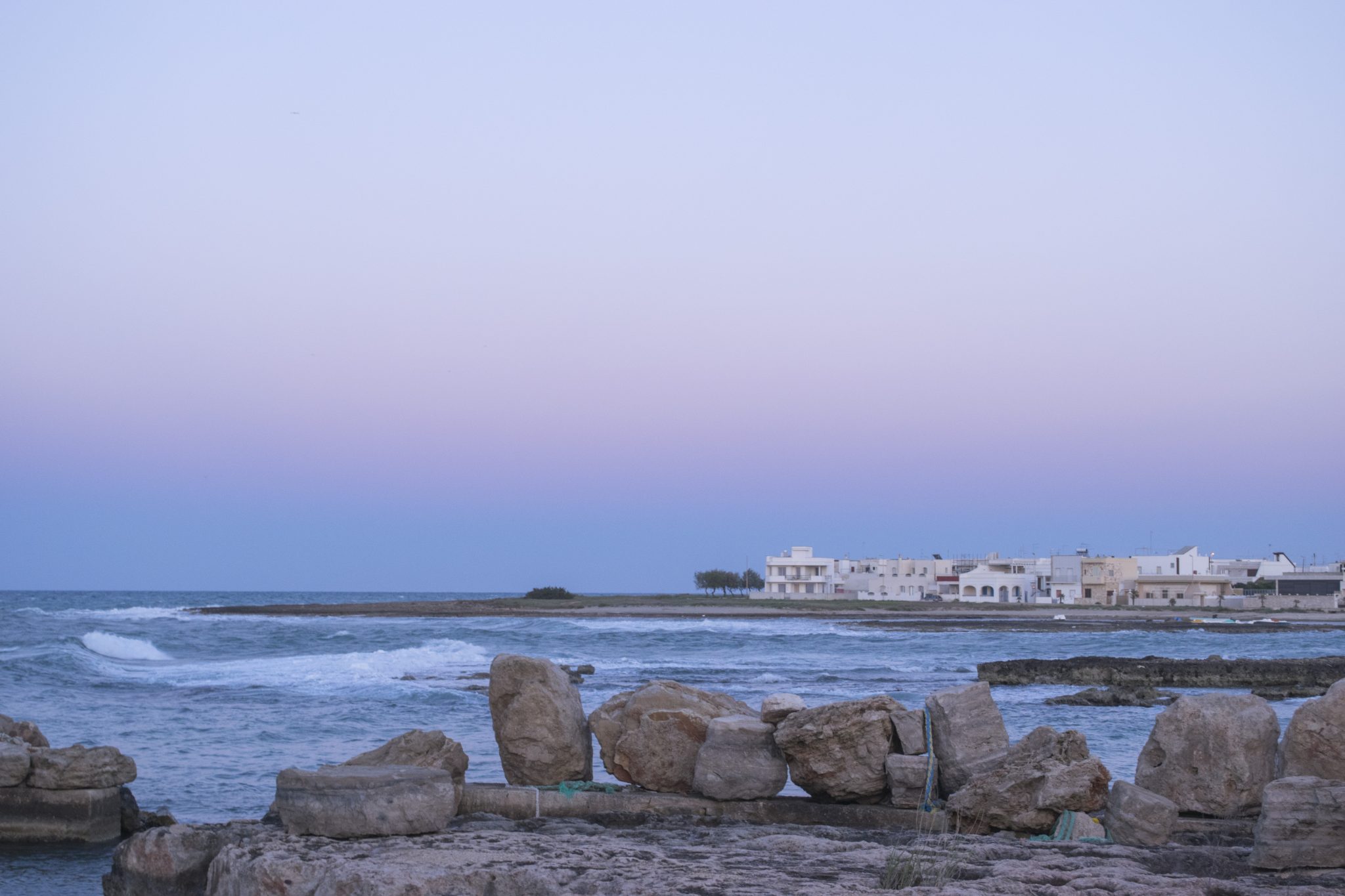 It feels like a unwritten law in Puglia, but there are always unpleasant surprises falling from the air. This time I had two inconvenient visits on my list.  After many phone calls the week before, I had to go to the Aria store. Aria is the company that provides us internet. Not this time, although we had paid our bills. So I asked what was going on (after many phone calls from Belgium the week before). The main antenna for the Ostuni area didn’t work properly anymore. But they were going to solve the problem. Probably by mid May (read: somewhere in the Summer). I couldn’t help but ask how long it had been since they first knew the antenna wasn’t working. Since October! But they had to get authorization from whatever political government.

Next annoying visit: to the city hall to get information on the garbage policy for this year. I had heard it changed again. I walked up the stairs to a big hall and found the door of the right department. On a paper attached to the door it said the department was only open on Tuesday and Wednesday morning, and I had the misfortune of coming on Monday. But I heard voices on the other side, so I knocked three times. No success. I noticed a door further down the hall was open, so I entered and asked for the specific department. The employee led me to a very angry looking lady sitting behind her desk, clearly not happy being disturbed by a bad speaking alien. She lectured me on how important it is to divide the rubbish properly, and that we tourists shouldn’t assume that we don’t need to sort the trash just because we’re on vacation. Of course I think it is important to sort and recycle! I just found that the system is very complicated in Ostuni. I was frustrated that my Italian was too poor to point out that the locals themselves sometimes just dump their rubbish on the streets.

I left and wanted to go to the tourist info center, and although it should long have been open by then, it just wasn’t. I asked the old lady in the shop next to the info center. “Oh well, she is probably still drinking her coffee. She’ll be back.” So I planted myself on the terrace at the café in the sun and ordered a tasteful cappuccino and chocolate cornetto (croissant). 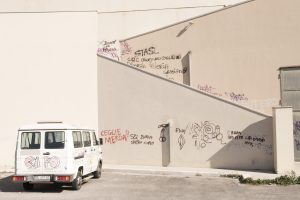 That night, in bed, surrounded by the thick walls of the Trullo, I found the time to read a little bit. I very much enjoyed the stories of Thomas Siffer, a Belgian writer and former chief editor of magazines. About five years ago, he decided to make a big change in his life and bought a house in Puglia, together with his wife. In his book – he also has a blog – he writes about the ugliness, adventures and beauty in the heel of the boot. So recognizable!

I certainly must not focus on the negative things: the bureaucratic system, the slowness and way of working I just don’t understand. When I check the statistics of my blog, and see the number of Italian visitors is increasing, I get nervous. As Thomas Siffer writes in his book: ‘I don’t want to end with a horse head on my pillow.’

I might have been complaining too much here. I apologize.

Beauty wins though! Definitely. When I am driving through the narrow roads, fenced by little rock walls, I feel like I am lost and all of a sudden an old Masseria appears before my eyes like a magical fata morgana. Masseria’s are old farmhouses, often changed into hotels now. A Masseria is what I imagined when I read House of the Spirits, of Isabel Allende, many years ago. Or when I am walking through the steep small allays in Ostuni, la città bianca, and smell the lemon and other fruit trees in terracotta pots on the steps, a scent that brings back memories of my childhood vacations in the South of Spain, I know this is  heaven on earth. With just a few sharp edges. 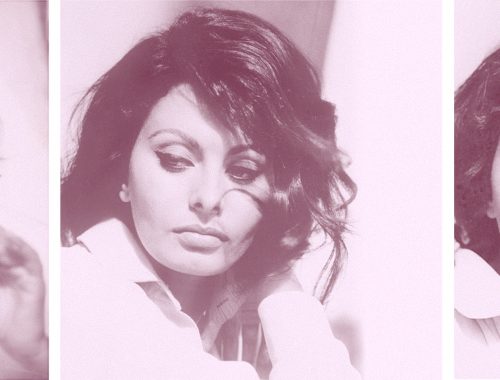 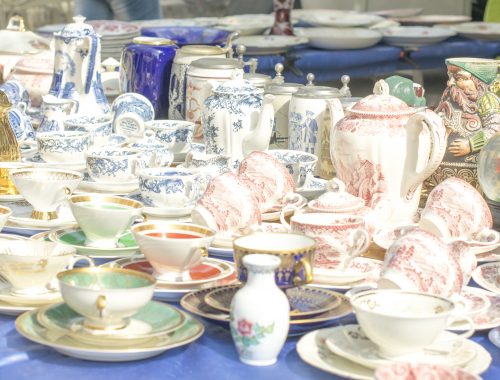 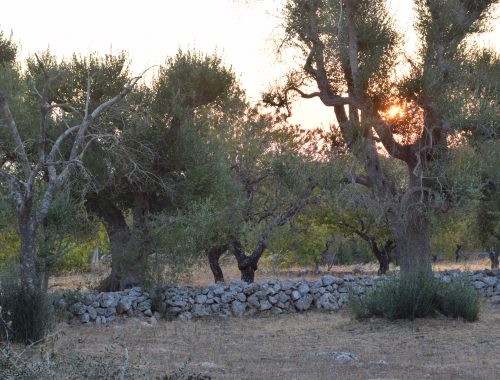